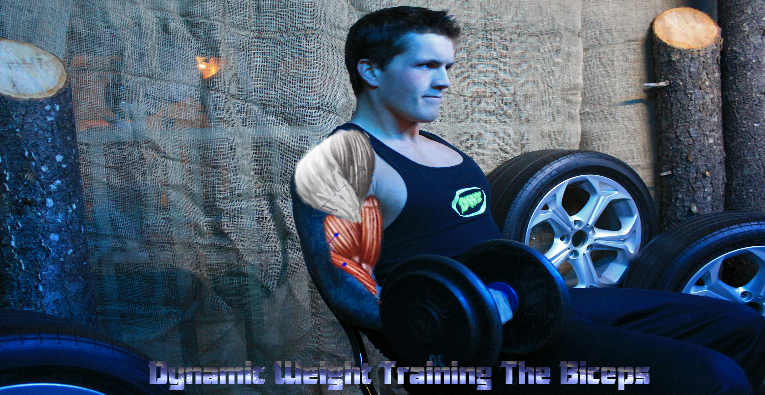 Building your biceps workout routine as a beginner, intermediate or advanced level lifter; this article covers a lot of ground. This is a realistic approach to some of the best older school exercises that really work.

The only way big biceps training becomes separated from mediocre or  nonexistent looking biceps is because: most people neglect to put in enough intensity or involve the right exercises and consistency.

I'll say it again – if you're "consistent", choose the right exercises and change them up often… including angle variation. If your soul mission is to make your biceps bigger, then start here! 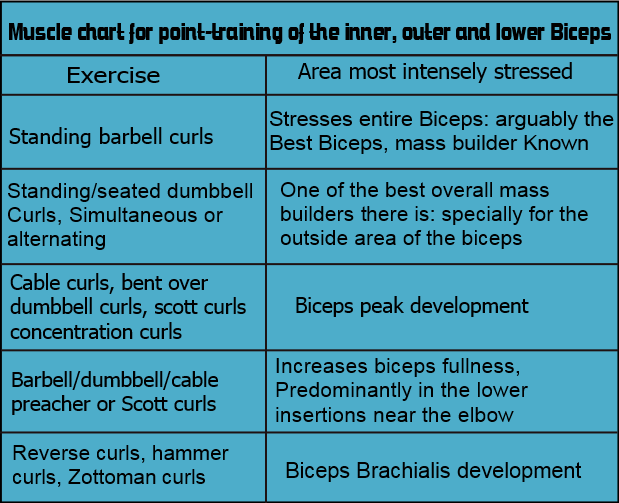 The point training biceps chart is only to help give a little direction to your biceps training by showing what exercises work-what areas of the biceps.

Lets have a look at the Beginners biceps workout routine and exercises, with how to illustrative photos, focusing on compound and strength based movements, including set and rep ranges for this level.

Most biceps development in the early stages start-off with these exercises. As beginners try to focus on each exercise movement, in other words: how your biceps are reacting to each exercise.

Give the biceps time to adapt to this new stimulus by constantly staying focused, keeping your form and exercise technique strict as possible.

Note: try not to bend over as you raise and lower the weight, train your lower back, hips and shoulders, to stay in line with one another avoid heaving the weights or twisting if you can help it...

The head and shoulders should always remain square facing straight-ahead, if you're having difficulty with this in the beginning, this often means you're simply lifting to heavy.

Adjust the weight to reach the desired set and rep range for your lifting level, as shown in the beginners biceps workout routine. 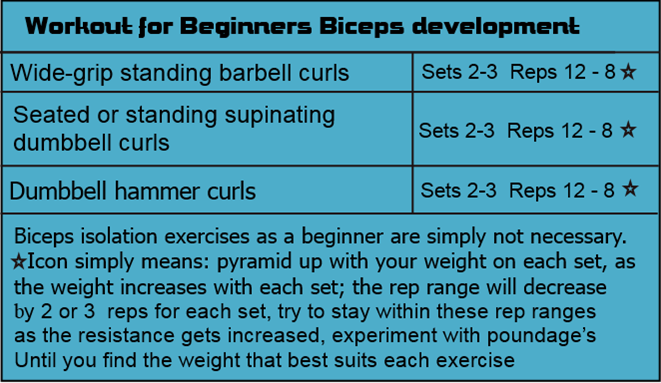 Wide grip BB curls should make up a big part of every beginners biceps workout routine, this is the granddaddy of BBT:, (big biceps training).

As a beginner: this exercise will focus primarily on the inside smaller head of the bicep, this strengthens and builds mass in the mid to lower part of the inner bicep, this is where big bicep development comes from.

This is a great biceps training exercise for beginners.

Seated dumbbell curls help teach good habits; in this exercise it's tougher to cheat - lean back slightly, controlling the weight with the biceps and shoulders.

Starting with the dumbbells facing your sides, slowly pulling up as illustrated as you come to the top, angle your baby finger towards the outside of your shoulder, don't move your hand just turn the wrist: this is called supinating this action gives a stronger contraction on each bicep.

Try to include DB hammer curls regularly in your biceps workout routine, there is two sides to the biceps muscle; an inner and outer, commonly neglected is the outer. Even starting out with this exercise early on is a should do-if you are not.

As illustrated: start with the dumbbells palms facing in, keep your back, shoulders and head straight, let the biceps do the lifting. Try not to let the 'DB' come all the way up, keep it back 6 or 8 inches from the chest, to keep the stress constant. 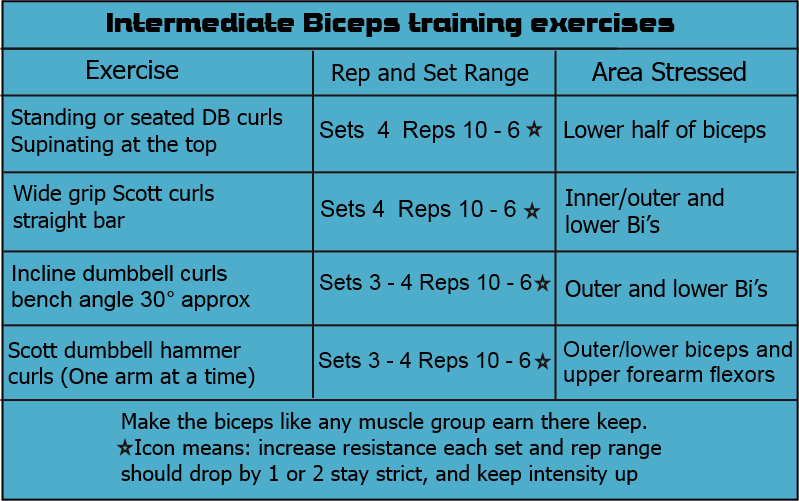 Intermediates should focus strongly on their biceps workout routine. Time should be taken see how they match up to other body parts including which areas of the biceps that appear weaker, that may need some extra effort while capitalizing on exercises that give the best results.

Not just training them as other routines commonly show, but...

actually get down to the nuts and bolts of big biceps training, this is accomplished by understanding their's two biceps heads and both need attention.

A regular change-up of exercises and training angles, always stacks the odds in your favour!

This might seem like an average exercise to the intermediate, but... It's only average, if you approach it that way.

Standing dumbbell alternating curls with a strong supination at the top as shown, is a tough exercise to beat! Because you're standing; this allows your legs and shoulders to assist somewhat - thus allowing you to use a little heavier weight.

Don't think lifting recklessly will increase biceps-mass, it won't!  Use dumbbells you can handle suited to your level.

Give it your all on this exercise as strict as you can, and save one or two cheat reps for the end. Where you really have to pull to get the weight-up, while squeezing on every rep at the top.

This is a great classic intermediate exercise that deserves its place in your biceps workout routine.

Alternating DB incline curls isolate the upper arms from the upper body or trunk, making it difficult to cheat in this exercise.

Staying focused; lower the dumbbell slightly slower than raising them, concentrate on this effort, this is a great biceps exercise because there is no assistance from other muscle groups.

For some reason-exercise movements for building bigger biceps seldom seems to include enough pronation movements like this exercise.

Keeping the hand in this hammer or pronated grip strongly stresses the upper forearm flexors including the brachialis and extreme outside biceps. lower the dumbbell deep into a full stretch, as you pull the bell-up, keep it over the biceps and give a strong momentary contraction before releasing again.

In the 70's and 80's, (pronation) grip biceps work was very popular, and a lot of guys had great outside looking bicep development, capitalize and exploit this exercise and your biceps will reward you. 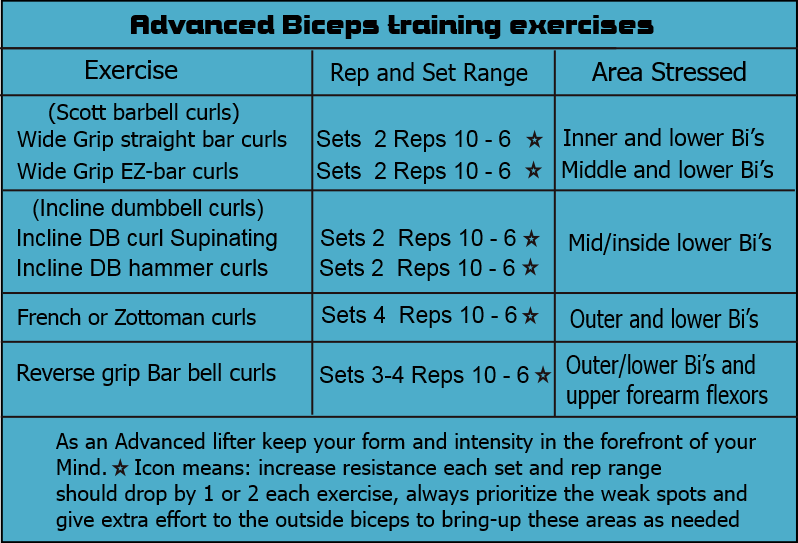 As you can see by the advanced biceps workout routine, I have broken up some of the 4 set bundles. E.g., perform two sets of the below exercises, then immediately switch to the straight bar, in what order you perform them doesn't matter. But...

The change in stimulation definitely does, If you're just starting to feel the set by the time you finish your fourth one, add an extra one, after all this is advanced lifting

Switch and include both of these movements, bundle them together for four or five in total, 2 or 3 sets for each exercise.

This is a great exercise for lower and inner big biceps development.

Concentrate by fully pulling the weight up staying back slightly at the top for a full contraction and lowering slowly, nothing should be done quickly on this exercise. Force the intensity issue for as long as you can stand it. 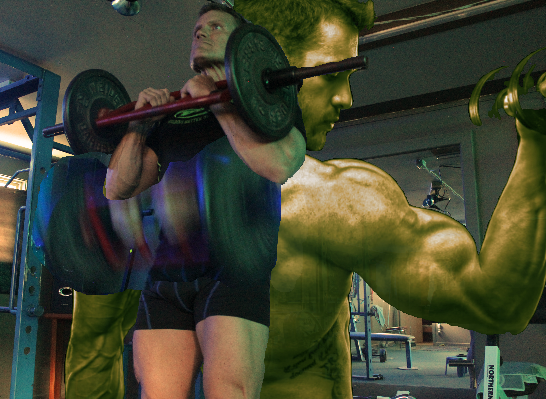 French curls are a great exercise. Because they force the hands and forearms into a pronated grip.

This grip in particular forces the outer biceps, the brachialis and upper forearm flexors to earn their keep. It's difficult to develop the outer biceps to their absolute potential, if you don't perform outside biceps training such as these.

Seeing images of Boyer Coe in the 70's and 80's performing French curls was inspiring and staggering to say the least! seeing this man's outer biceps, development and vascularity stopped most men in there bodybuilding tracks.

Reverse barbell curls are a simple exercise in design, if you're not used to them, start with lighter resistance as shown in the image. This exercise helps build and condition the outer biceps including upper and lower forearm flexors.

Keep the eccentric part of the motion or (lowering), slightly slower than that of raising, try to increase weight as you progress and become conditioned to this exercise. This exercise can also be performed using the seated Scott curl bench.

This exercise is another exercise, that's good to split with the 4 set bundle with the below exercise, in your biceps workout routine:

As casual as this exercise may appear: this movement will help build more pronounced outer biceps muscle belly growth...

The brachialis also receives a lot of stimulation here forcing this muscle into new growth, this new growth in the brachialis as it develops; actually pushes the outer biceps muscles outward and forward. Ultimately leaving this pancake shaped muscle on the side of the arm looking larger-than-life.

This training action helps extend the girth or width in your biceps. Force the outer biceps to really work - keep the dumbbell back from your chest slightly for a strong contraction at the top.

This exercise is being performed with the hand straight in line to the shoulder, experiment with the angle, meaning: turning the dumbbells outward slightly and pull them up to the shoulders at an angle, this will stress the outside of the biceps even more.

Include at least two sets of seated or incline supinating DB curls of the 4 set bundle, back to back with incline DB hammer curls; is a great way to add variety. Keep rests as short as you can to increase intensity and absorb a little more muscle shock.

As an advanced lifter, just be sure to change up the variety of exercises, including angles even creating your own style of lifting to shape and sculpt the biceps the way you want them to look.

DB curls whether you're seated or at an incline, you don't expend a lot of energy and can cheat very little. Make the most of this, push yourself until your spent. Even try a drop set, and immediately use a lighter set of dumbbells, to increase your intensity and pump.

Always try to add intensity through change. Even changing your mental approach towards your bicep training by not taking anything for granted, big growth comes from big effort!

As you advance... after the year and a half mark, it becomes difficult to see biceps size results - especially: if you are a drug-free lifter.

Instead of adding extra sets, what I've done for you is to break up some of the 4 bundle sets into two smaller sets,  this keeps change a little more constant, the whole idea as you advance, intensity should always be pushed to whatever your lifting level can stand.

Breaking bigger set bundles into smaller ones and changing angles that stress the biceps muscles differently is a huge key in building bigger biceps. Looking at yourself in photos or in the mirror, finding and defining weak points in your bicep development is also key in this developmental stage.

Often advanced lifters overlook their potential, by simply devaluing the thought of change, Change takes effort change means stepping out of your comfort zone. Don't be afraid to step out of it, on days when you're feeling strong step well out of it!

In other words: don't keep coming to the gym and performing the same biceps workout routine. Break it up and become dynamic with your exercise sets and except change, because: change does one thing... Change will make you grow.